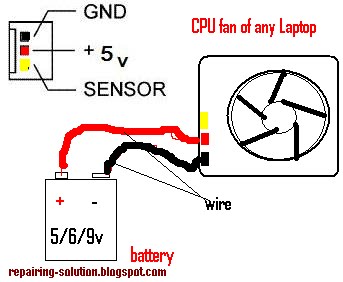 Yes, the fan, if plugged into the headers on the Motherboard, should be spinning. Even PWM controlled fans spin unless you manually disable them.

What kind of Laptop do you have? Usually, there's more than 1 fan header in Desktop Motherboard and You can always plug in the fan into a different fan header on the Motherboard to test the fan. but on Laptop motherboard there is only one header socket.
The one that is labeled CPU fan is to monitor and control it through the bios. If you fan isn't spinning when you boot up your Laptop, go into the bios, manually override the fan setting to spin at 100% all the time. If it doesn't spin, then there's a problem. Either your fan or the fan controller PWM circuit on the motherboard.

basically CPU fan has three to four pin connector/jack and different color wire.
fan connector placement is shown in the figures below:

Pin Name Color
1 GND black
2 +5VDC yellow
3 Sense green
4 Control blue
CPU fans may use it 3-pin or 4-pin power connectors. 3-pin connectors are usually used for the smaller fans with lower power consumption and 4-pin connectors are usually used by CPU fans with higher power consumption. Fans and on-board fan headers are backwards compatible.
if now your fan not spinning even if it is proper plugged in on laptop motherboard, and your bios is fine
then first of all you should have to check fan with a 5v battery or you can use little high voltage battery like 9v but at this time don't connect fan with battery for a long time, that can damage fan.
to check a CPU fan with a battery just leave sensor pin free(no connected) and connect it's positive terminal with battery +ve point and GUN pin of fan connect with -ve of battery shown in the figures below if Fan start spinning that means CPU fan is ok now the problem has in your laptops motherboard